A crane makes its own decisions

The crane and conveyor technology supplier Erich Schäfer (ES) planned and installed an automatic crane system for feeding and removing fuel for a combined biomass heat and power plant. One of the most important tasks of the crane is to independently monitor the fill level of the storage bunkers from which the plant is supplied with fuel.

The Max Bögl group of companies with headquarters in Neumarkt in the German Oberpfalz region was founded by Max Bögl sen. in 1929 as a bricklaying operation. The construction company, which is now under third generation private management, is one of the five largest of its kind in Germany with around 6000 employees worldwide. One subsidiary is Max Bögl Bioenergie GmbH which focuses on renewable energy production.

The woodchips are filled into push floors using a crane system.

To supply the company premises at the Sengenthal plant with energy, Max Bögl Bioenergie GmbH operates a combined biomass heating and power plant (CHP). This CHP plant supplies the premises with process heat in the form of steam and hot water while the generated electricity is fed into the public power supply system.

The CHP plant is fuelled with wood which is delivered as chips. Large machines additionally turn wood from a backup store into woodchips. These are then transported to the CHP plant on a lorry and unloaded there (image 1). Then the fuel has to be filled into the designated push floors, ideally with a specially designed crane system. Max Bögl operates special crane systems from Erich Schäfer GmbH & Co. KG (ES) in many of its plants, so operator and supplier have already become a good team. That was one of the reasons why ES was able to win this order by tender and sign the contract on 12 October 2012.

After the tender phase, the project continued as follows: The scope of the project was specified in detail during initial meetings at the premises of Max Bögl in Sengenthal on 21 October 2012. During follow-up meetings, which also included the freight dimensioning specialist AKL-tec GmbH from Alsdorf, the partners defined the basic parameters for the crane system and the control station. It was stipulated that no components should travel on the crane and that all operating data had to be displayed at the control station. As the fuel is delivered on lorries, there had to be safety measures to prevent a collision between crane and lorries. And finally the operating company wanted not only automatic control for the crane system but also a manual radio remote control option. It was decided that all components would be installed in a central control cabinet on the shop floor. This means that maintenance work and redressal of possible malfunctions can be carried out easily without a lifting platform. However, this increases the number of lines to the crane used in the trailing cable. 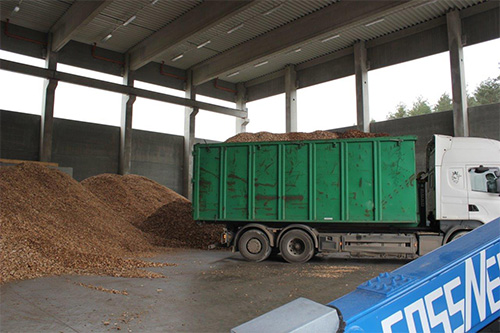 1 The biomass combined heating and power plant is fuelled with woodchips which are transported to the CHP plant with a lorry and unloaded there. 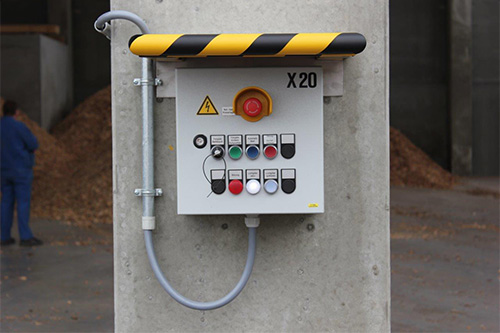 2 To enter the storage for unloading the woodchips, the lorry driver can move the crane out of the entrance using an operating panel.

The entrance to the storage area is monitored by laser light barriers to ensure the already mentioned collision protection for crane and lorry. The lorry driver can move the crane out of the entrance using an operating panel (image 2). Clearance is signalled by a stoplight (image 3). In the next step, the companies involved discussed the crane equipment. While a clamshell grab was considered initially, the final decision was for a orange peel grab from MRS Greifer GmbH (image 4). Clamshell grabs are suitable for fine materials and can take up even the last residue at low material levels. Orange peel grabs on the other hand can dip into the fuel material even better, allowing more material to be transported per lift. 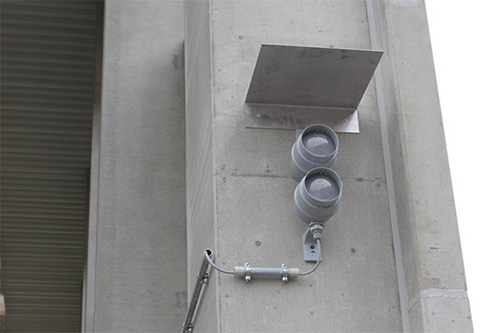 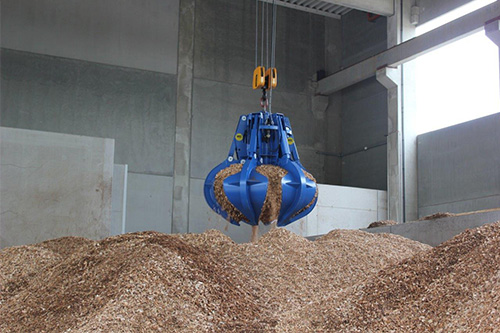 4 An orange peel grab is used for handling the woodchips

The interaction between the components was tested regularly.

After the successful planning and design phase, the mechanical and electrical components were manufactured at ES. Beforehand, all employees involved received an introduction into the project, any inconsistencies were eliminated and different levels of knowledge were balanced to ensure that subsequent tasks would run smoothly. The crane and the corresponding components were completely manufactured at ES and assembled by 5 April 2013. During production, the interaction between the components was tested to allow immediate action to be taken if any problems had occurred. This did not become necessary, though. After assembly of the mechanical crane components, preliminary commissioning was carried out together with AKL-tec from 11 to 16 April. Special approval had to be obtained for the transport of the pre-assembled cranes from the ES works in Siegen to Max Bögl in Sengenthal on 22 April 2013. Company transport means were used to deliver the individual components.

On site, the individual components of the crane were moved to the crane track by a mobile crane and then assembled using lifting platforms. This included mounting of reflectors and limit switch triggers as well as laying and connection of the travelling cable. In the end this was hardly more than routine work for the ES installers, who finished the task on 26 April. 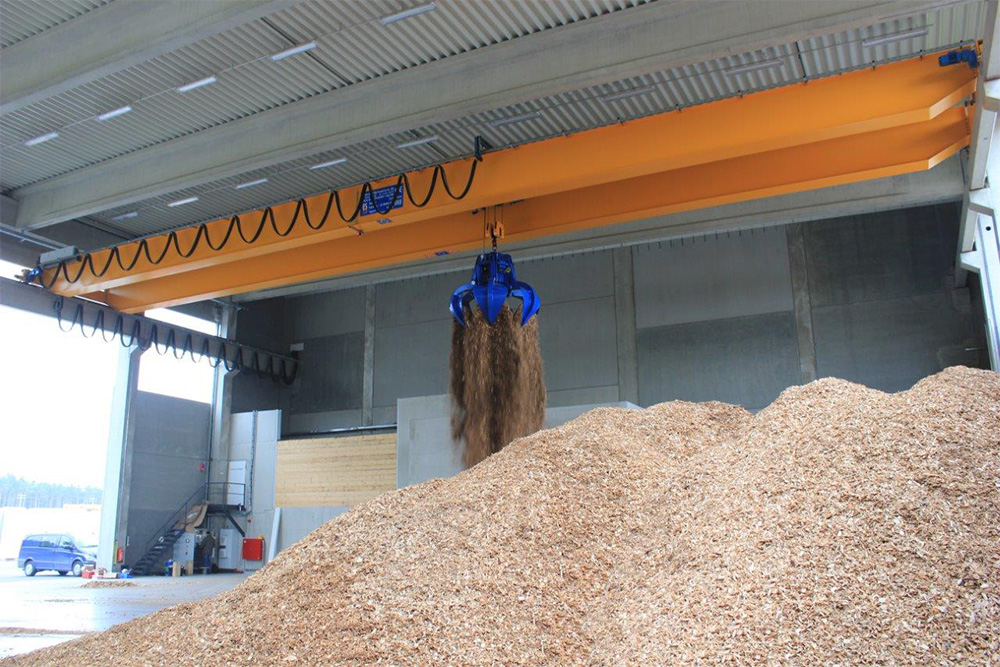 5 The system, which was first tested at the manufacturer's factory, was commissioned between 29 April and 4 May 2013

All conceivable applications and malfunctions were considered during the test phase

The system previously tested at ES was then commissioned between 29 April and 4 May 2013 (image 5). Any small coordination problems that became evident were quickly redressed together with AKL-tec. The grab was then delivered to the customer and attached to the crane system on site. This was followed by a test phase from 6 to 8 May during which all conceivable applications and malfunctions were tested and the paths were adapted to ensure optimum processes. Acceptance by a crane specialist from ES went smoothly and was successfully completed on 10 May. Mechanical, electrical and control systems worked flawlessly so that the crane was finally handed over to Max Bögl on 14 May 2013.

During handover, the Max Bögl employees were familiarised with the system and trained in the operation of the automatic processes and manual operation.

The control system is mounted on the shopfloor and contains all control units as well as the safety monitoring system. The lifting device and the crab and crane movements are controlled with Demag frequency converters of type “Dedrive Pro” to allow variable and precise positioning of the coordinates provided by the “Apache” volume measuring system from AKL-tec. To prevent fire hazards, the braking resistors commonly used in frequency converters, which transform the braking energy of the motors into heat, are housed in a cooled and temperature monitored second control cabinet.

Further operation of the crane is only activated after unloading of the lorry.

Before unloading of the lorry, the personnel has to request clearance of the entryway on an operating panel. This moves the crane into a defined park position and provides safety monitoring for the crane during the unloading process. Without this request, the crane would be switched off when moving into the building.

After unloading the lorry, further operation of the crane is activated via the operating panel. The two entryways are monitored with laser light barriers to ensure safety. During a check move, two laser measuring systems from Sick, type LMS 500, measure the level of the fuel within the approx. 35 x 32 m large working area of the crane and calculate a three-dimensional coordinate where the fuel level is currently the highest.

All these measuring systems are connected with an embedded controller PC (Core2Duo) and the crane control via a programmable logic control (PLC) of type “Siemens S7 CPU (315-2 DP)”. This allows the grab to be into the fuel materials in the exact desired position. 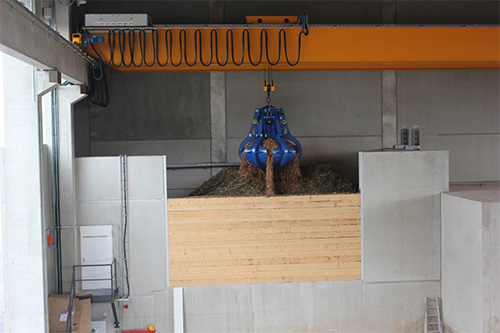 6 From the place of storage, the crane transports the fuel into one of two bunkers from where it is conveyed to the combined heating and power plant. 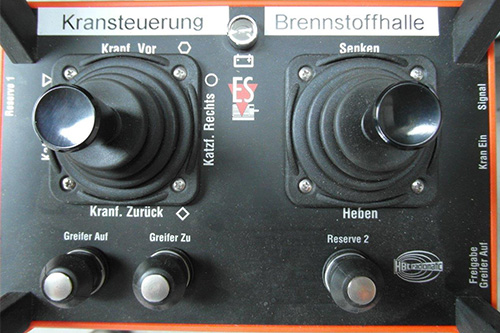 7 If the automatic control fails, the crane can be operated manually using a radio remote control (images: Erich Schäfer)

The working area of the crane is secured by laser barriers

After successfully grabbing the materials, the crane transports it into one of the two bunkers (image 6) from where it is conveyed further. The crane hovers over these bunkers until the LMS 500 detects that the fill level of the bunker is declining. Then a refill move is triggered.

To ensure the highest level of health and safety, laser barriers secure the working area of the crane. If any authorised personnel enter the area, the crane automatically stops.

The system detects the maximum and minimum levels of the fuel material and is designed to independently spread the material evenly. This allows the woodchips to dry better and makes more even use of the storage room.

The crane system can be operated manually by switching the operating mode. If the automatic control of the crane system fails, the crane can be operated manually using a radio remote control (image 7). This means that the CHP plant can continue operation even whem a malfunction occurs. Operating data and any malfunction warnings are also displayed at the control station. It is also possible to switch between different work programs. As an expansion, certain data can be sent to the responsible supervisor's smartphone.

The handover of the documentation on 14 May 2013 successfully completed the project “automatic crane with orange peel grab”.